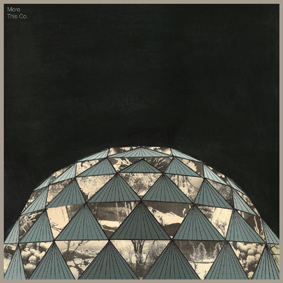 This Co. presents "More", their second album. After years of silent work, This Co. comes back at the end of April with More, their second independent album. As the title suggests, this is a more dense, elaborated and mature album than the previous one.
This is definitely More This Co. Loaded with that dark atmosphere introduced on their debut, More dives deeper on those layers of punk, new wave and electronics that define the sound of This Co., but without giving up their intention to make you dance. The album was independently produced with the collaboration of the musician and producer Juan Cristobal Saavedra (a.k.a. Equipo) on the electronics. The launch of More will count with an additional remixes EP, in charge of people such as El Sueño de la Casa Propia, Pol del Sur (ex Compiuters) and Equipo, among others.

Biography:
Since their inception by 2007, This Co. has been highlighted by the visual power and sound of their live performances. This has earned them recognition on the stages of the Santiago scene, reaching, alongside the release of their first self-titled album (2008), excellent reviews from the press. To name a few, Rolling Stone highlighted the single "As you know" as a hot track in their Chilean edition and MTV selected the video clip of the same song as one of the 10 most requested on MTV LA. After their successful European tour in 2009, This Co. quietly focused in the composition and production of what would be their second LP More, and their EP of remixes. This Co. is currently formed by Jorge Christie (vocals / guitar), Nicolás Rebolledo (guitar / keyboards), Omar Van de Wyngard (drums) and Carlos Vergara (bass / vocals).

Taped by
This Co.

Uploaded by Clinical Archives on June 1, 2013